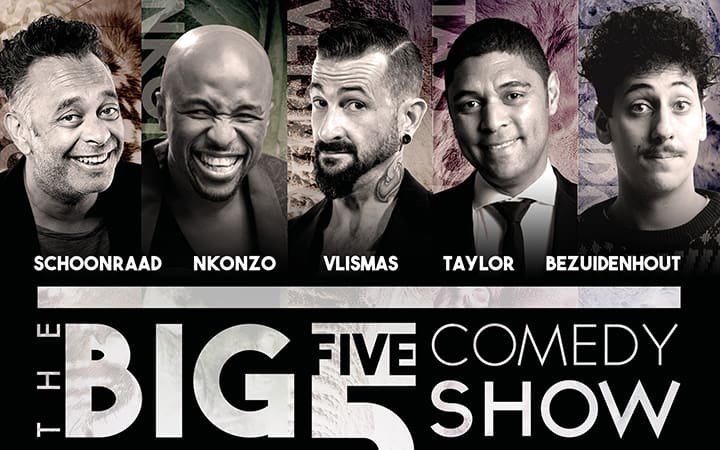 GET READY FOR HIGH-STERICS WITH AN ALL NEW LINE-UP

Slap a “Big High 5” as some of the continent’s most sought-after performers get their act together for another comedy-and-music spectacular. If your stomach muscles is up to it, do not miss this year’s national Big 5 Comedy Show, proudly supported by Comedy Central Africa, kicking off at the Teatro in Montecasino on Friday 26 July & Saturday 27 July.

Soak up the laughs when Stuart Taylor, John Vlismas, Schalk Bezuidenhout, Tats Nkonzo and Kurt Schoonraad take to the stage with plenty of fresh quips in their comedy arsenal.

After last year’s sold-out shows, this year’s edition promises to be another ground-breaker as Schalk, Kurt and Tats join the line-up. No doubt these household names will add tang, spice and new angles to the Big 5 family.

Entrepreneur, comedian and founder of Taylor Made Productions, Stuart Taylor once again returns as host with an even mightier team of funny men and a new line-up of exceptional talent. The man who is “Going Everywhere Quickly”, Stuart is the ringmaster who has the experience and know-how to keep his audience knee-slapping with mirth while introducing each of the Big 5 acts.

A comic artist who has carved a fresh set of grooves on stage, Tats Nkonzo is a renowned treasure-chest of humour, who cleverly combines musical vibes and charming wit, both in South Africa and abroad. The world is not enough for this talented artist who has won the Montreux Comedy Contest in Switzerland, back in 2014 and is currently a judge on the new global talent competition on CBS, ‘The World’s Best’ along with the likes of Drew Barrymore, Faith Hill and RuPaul.

Schalk Bezuidenhout has become a comic-giant, having racked up several nominations and awards whilst storming on the domestic and international stage. His quirky ‘stache’ and ‘fro’ complement a sharp tongue and a unique take on modern society. This performer truly is the epitome of young and smart comedy which represents the future of this industry.

An innovator and stalwart of the comedy scene, Kurt Schoonraad joins the team with his brilliant and witty jabs, all delivered with a disctint Cape Town flavour. A long road of fame and success which includes numerous local and international performances, as well as several film appearances, has made his performances truly exceptional, so prepare for loads of belly-laughs when he takes to the stage.

One of the heavy weights of SA Comedy, John Vlismas needs little introduction after many years on the comic circuit. Thought-provoking in his approach, there are no sacred cows he leaves untouched to bring his audience a different perspective. Get ready to rethink your opinions while lauging out loud with John’s unique style which completes the line-up for this awesome show.

Returning for more, The King of Beats is back. Big 5 Comedy’s resident scratch boss and legend, DJ Ready D, will use his award-winning skills to create an electric atmosphere. But be warned – he may just having you dancing in the aisles!

“It feels as if the Big 5 Comedy brand has come of age and we are excited about how we can take the audiences’ experience to new levels in 2019. The hallmark of Big 5 Comedy has always been this: uncompromising quality with regards to not only the acts on the bill, but also the overall experience for the comedy lover in the audience.” says Stuart Taylor, Producer & Host

Tickets are available at Computicket and range from R180 to R350 (with a 10% discount for block bookings of 10 or more people). Please note that the show is rated PG16.