The Rocky Horror Show Is Coming! 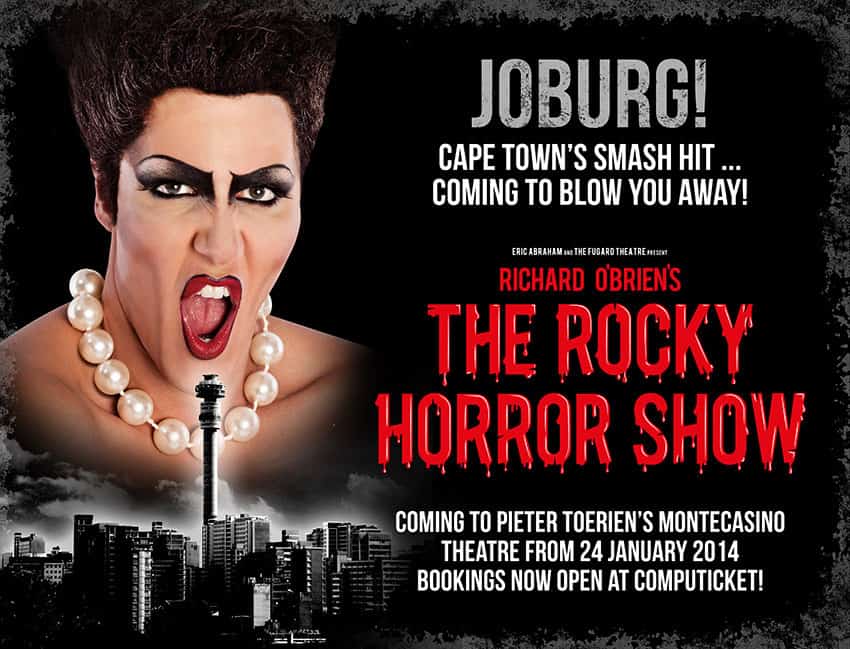 The Rocky Horror Show Is Coming To Blow You Away!

The Rocky Horror Show transfers and opens at Pieter Toerien’s Montecasino Theatre in Johannesburg on the 24th January 2014 for a very limited 10 week season only. The production must close on Sunday 30 March 2014.
The Rocky Horror Show, directed by Matthew Wild, has taken the Mother City by storm and has received rave reviews across the board.

The Fugard Theatre’s Executive Director Daniel Galloway said, “Never in our wildest dreams did we think that our production of Rocky Horror would create this sort of response from our audiences. We knew it would be popular but we were literally, night after night, overwhelmed by the incredible audience response. For some time now we have noticed a loud call from Joburg for our show to travel up North … so, here we come!”

The media have garnered the Production with great acclaim:

The Cape Times called it a  “fabulously riotous night of over-the-top-fun…. you’ll come out the other side of this performance gasping for air”

The Cape Argus gave it 4 stars and called it  “Sheer Enjoyment”.

The Sunday Times summed it up as ” … down and dirty, camp and cult and fun, fun fun”.

While whatsonincapetown.co.za simply declared it “the hottest show on stage this season” and went on to say “this is more than a show, it is a delicious cult classic of epic proportions, executed in finest form”.

“Louder, prouder, and more loveable than ever” is how Eye Witness News described it with Die Burger weighing in with a 5 star review claiming  “niks wat skaaf of skuur nie … dit is ‘n seepgladde produksie”.

Cape Town Travel declared it a “Must See”, bizcommunity.co.za said it was “jaw-dropping awesomeness from start to finish…out of this world cast…”, S.A. Broadway World called it “… an astounding experience”, The next 48 Hours put it simply with “… the Fugard nails it!”; and as thewritingstudiostudio.co.za summed it up with “…definitely a night out that you will remember for a very long time!”

Show specific Participation Packs, for sale at each performance, are a huge hit and make for even more fun as theatre goers throw confetti, wave glowsticks and snap their plastic gloves as instructed by the Narrator. Dressing up for every performance has proven very popular amongst audience members – with fishnets, leather and feather boas a plenty!

There will be official dress up nights at each 8pm performance on every Friday and Saturday night beginning on Friday 31 January 2014! So get a group together, plan those outfits and book your tickets today!

Bookings for the short Joburg season of The Rocky Horror Show are now open – and tickets will move fast so grab yours today. Performances at the Montecasino Theatre run Tuesday to Fridays at 8pm, Saturdays at 4pm and 8pm and Sundays at 2pm and 6pm. Tickets ranging from R100 to R350 are available through Computicket or the Theatre box office on 011 511 1818.

The producers recommend an age restriction of no under 16. Strobe lighting is used extensively in the production.