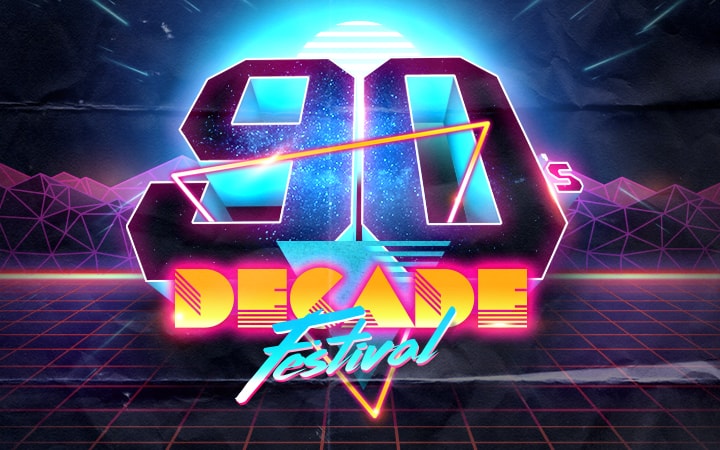 Enjoy nostalgia-filled festivities brought to life by the greatest and most iconic talents from the dance floor & radio frequencies of the ‘90s.

Tickets are on sale now from www.lovemusic.co.za

“Our first edition of the DECADE FESTIVAL promises to be an incredible day out. Musically, we have put together an unbelievable selection of the greatest and most iconic talents from the dance-floor & radio frequencies of the ‘90s in a concert setting to relive one magical night of the music that is the life soundtrack to so many of us. Tickets are on sale – get yours now!” encourages Event Organizer, Guy Herman.

This Event is STRICTLY for ATTENDEES OVER THE AGE OF 18. | Right of Admission Reserved

Robin S, born and raised in Queens, New York, began singing at the age of five in a church choir. At the age of fifteen, Robin went to join both jazz and cover bands in the New York metropolitan area, performing at dinner clubs, lounges and other venues. These years gave her the experience and contacts that led to her first gold single, the worldwide chart-topping smash and dance music classic – remixed with great success by Stonebridge – ‘Show Me Love’. The success of ‘Show Me Love’ gave rise to collaborations with a variety of producers including Junior Vasquez, Nick Martinelli and David Morales.

Robin was named Best Dance Artist at the Billboard Awards in 1993 and ‘Show Me Love’ received the award for Best Dance Single. Robin also earned the award for Best Dance Artist at the Winter Dance Music Conference. She has continued to make an impact across the globe with singles such as ‘Love For Love’, ‘What I Do Best’, ‘I Want To Thank You’ and ‘It Must Be Love’ as well as TV appearances and a string of tours around the globe, showcasing her unique blend of vocal excellence, energy and show stopping songs to create powerful and passionate performances.

Black BoxOne of the leading exponents of a wave of Italian house music that flourished on the dance floors of the late 80s and early 90s, Black Box is comprised of three Italian studio musicians Daniele Davoli, Mirko Limoni and Valerio Semplici. Now, after a hiatus from music, these Italian Stallions are back and are ready to dominate the scene all over again. Based in the Reggio Emilia area of northern Italy, the team made use of Katrine as a front woman for the Black Box project. Semplici was a clarinet teacher and played in the Music Orchestra in Bologna and Davoli was a well-known Italian club DJ (known as DJ Lelewel), largely at the Marabu Starlight Club and responsible for the hit single ‘Grand Piano’, another prime example of Italo-house, while Limoni was the computer and keyboard whizz kid of the trio.

The Black Box team are also known as the Groove Groove Melody team and were established as one of the top production outfits in Italian dance music, churning out more than a dozen singles a year in their native country. Among these productions the British music industry spotted ‘Ride On Time’. The single became the first of a series of Italian house records to crossover to the UK charts, staying at #1 for six weeks in 1989, and becoming one of the best dance selling records of all time.

Crystal WatersWhen you hear the name Crystal Waters, you immediately think of a 20-year brand and career that continues to engage and please her enormous fan base.
She is best known for 1991’s “Gypsy Woman (She’s Homeless)” and 1994’s “100% Pure Love.” Her accolades include three American Music Award nominations, a MTV Video Music Award nod, four Billboard Music Awards and 6 ASCAP Songwriter Awards.

Collaborating with Alex Gaudino in 2009 on “Destination Calabria” for another #1 European hit, In 2012, “Le Bump” her collaboration with Yolanda Be Cool (We Speak No Americano) gained her another number 1 spot on the Beatport House Chart, and with DJ Chris Cox in 2013 the #1 Billboard Dance Chart Hit “Mama Hey” was listed as one of Billboard’s “Top 50 Dance Songs of 2013”.. In July 2014 Crystal released “Be Kind” with heavyweight producer StoneBridge and within a few weeks has received over 60,000 streams on Spotify guaranteeing another hit for Ms Waters.