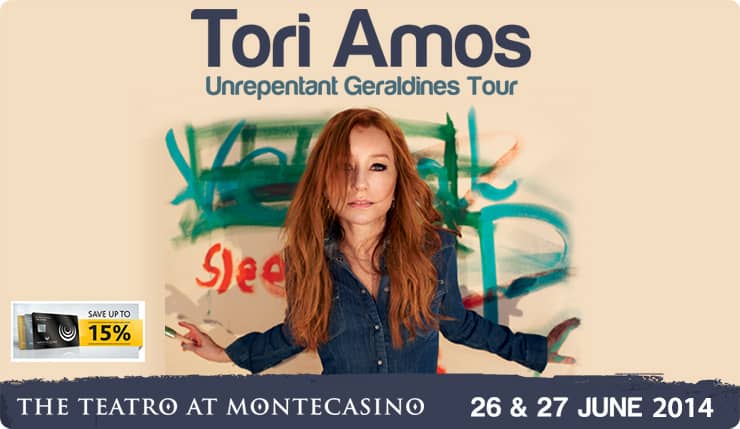 SA promoter Charl van Heyningen is proud to announce that multi-talented Durban-born musician Michael Lowman will be joining Tori Amos at the end of June 2014 as the supporting bill guest artist on the SA leg of her world tour.

Tori Amos returns to South Africa for four performances only in support of her latest album, Unrepentant Geraldines. Tori Amos begins her SA Tour at the Teatro at Montecasino on Thursday, 26 June and Friday, 27 June commencing at 8pm followed by two concerts at the Cape Town International Convention Centre on Sunday, 29 June at 6pm and Monday, 30 June at 8pm. Tickets on sale at Computicket.

Now based in Johannesburg, Lowman is excited to perform on the same stage as eight-time GRAMMY nominee singer-songwriter, pianist and composer Tori Amos. “It’s incredible to support an artist like Tori Amos,” says Lowman. This is a career defining moment for me. I can’t wait to stand on stage with my guitar and sing my heart out for her fans, the people that love her music. Who knows, hopefully they may fall in love with me a little bit too. I’m just so completely over the moon.”

Michael Lowman’s career began at the age of 17 when he learnt to play the guitar and began writing songs. A few years later Michael started posting videos of himself performing his own songs on YouTube. In an inspiring twist of fate, these soon caught the eye of Los Angeles record exec Scott Austin (formerly of Maverick/Warner Bros and Capitol Records). As the head of independent label, Authentik Artists, Austin  focused on recording emerging artists and securing film and TV placements for their songs, and was immediately captivated by Lowman’s sound. On his own steam, the young singer-songwriter made his way over to the States and set about recording his first EP, produced by Mark Needham. The EP earned Lowman a slew of high-profile TV placements, including spots on the Kardashians’ show Kourtney and Khloe Take Miami, but a VISA complication resulted in Lowman returning home to South Africa and ultimately signing with Universal SA and the recording of his debut album, Crayon Boxes, released in September last year.

The title track, “Crayon Boxes” was used for an advert for Property 24. The first single, “Your Lovin’ Ain’t Right” hit the Top 3 position on 5FM, Jacaranda FM and OFM while the  second single, “Girl Saves Boy” gave Michael his first number 1 hit, when song topped the Jacaranda FM Top 20 (along with a slew of top 5 chart positions all over the country).  With chart-topping success so early in his career and a nomination in the Best Newcomber category at the 2014 MK Awards as well as South African Music Award for “Best Adult Contemporary Album” for his debut release “Crayon Boxes”,  South Africa is getting to know Michael Lowman.  As the supporting guest artist for Tori Amos, this up and coming singer and songwriter is fast becoming a household name.

Catch Tori Amos and Michael Lowman at Montecasino and the Cape Town International Convention Centre this June.  It’s a high note for every music lover’s diary. Book now at Computicket or visit www.computicket.com. For further information log onto www.toriamos.com or follow Michael Lowman on Facebook and Twitter.

His single “Crayon Boxes” is featured in the new Property 24 TV and radio advert – http://www.youtube.com/watch?v=7s9PCVetUTM

“Crayon Boxes” also latest single to radio and already playlisted on 5FM and charting on Jacaranda
His 2nd single “Girl Saves Boy” peaked at #1 on Jacaranda FM’s KIA TOP 20, #1 on the ALGOA FM Top 30, peaked at #4 on the 5FM Top 40 and currently charting on the Take40SA chart on Highveld and KFM!

His debut single “Your Lovin’ Ain’t Right” charted on stations such as 5FM, Jacaranda (peaked at #5 on the 5FM Top40 and at #2 on the Jacaranda FM Top 20), Highveld, Kfm and East Coast Radio – watch the music video here:  http://www.youtube.com/watch?v=XDC_qTYEkLo